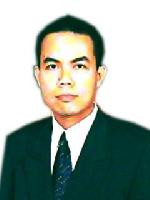 Image Segmentation is a process to separate between foreground and background. Segmentation process in low contrast image such as dental panoramic radiograph image is not easily determined. Image segmentation accuracy determines the success or failure of the final analysis process. The process of segmentation can occur ambiguity. This ambiguity is due to an ambiguous area if it is not selected as a region so it may have occurred cluster errors. To solve this ambiguity, we proposed a new region merging by iterated region merging process on dental panoramic radiograph image. The proposed method starts from the user marking and works iteratively to label the surrounding regions. In each iteration, the minimal gray-levels value is merged so the unknown regions significantly reduced. This experiment shows that the proposed method is effective with an average of ME and RAE of 0.04% and 0.06%.