2018 : The Oxygenated Biomarker as an Indicator of Origin and Maturity of Miocene Brown Coal, Sangatta Coal Mines, East Kalimantan 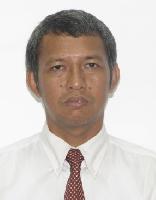 The Middle to Late Miocene brown coal extracted from Inul area, Sangatta coal mines, East Kalimantan, was studied to recognize the distribution of ketone and acid biomarkers. Samples were extracted using soxhlet method and separated by column chromatography and thin layer chromatography. Acetylation of acid fractions by BF3/MeOH produced an ester compound which is an acid derivative. The distributions of fatty acid methyl esters were analyzed with gas chromatography-mass spectrometry (GC-MS). The distributions of ketones included compounds in n-alkan-2-one, amyrin-derived ketone, and friedeline derivatives as well as olean-13 (18)-en-3-one with oleanane skeleton. Distributions of fatty acids included compounds in the range from n-methylhexadecanoate (n-C16) to n-methyltriacontanoate (n-C30) with dominating compounds from n-methylhexadecanoate (n-C16) to n-methyldococanoate (n-C22). The most obvious feature is predominance of compounds with even-over-odd-carbon-atom-number in a molecule, which come from vascular plant fatty acids. The distributions of these biomarker compounds are used as an indicator of higher plant and oxic depositional environment, as well as the involvement of bacteria in diagenesis stage which indicates immature coals.