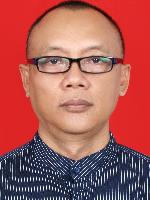 Effect of hydrogen dilution on deposition rate, energy band gap, localized state defect-through observation of energy absorption Urbach, and surface roughness of intrinsic thin film was investigated using RF-PECVD. Films were grown on ITO glass substrate. Analysis of energy band gap was conducted to determine changes in the structure of a thin film of a-Si: H. Energy band gap is important to determine the portion of the spectrum of sunlight that is absorbed solar cells. The sun's rays with energy greater than the energy band gap will be absorbed by the solar cell, but the rest will be the thermal energy which results in low efficiency. Characterization using UV-Vis spectrometer and Tauc's plot methods showed that wide energy band gap was greater for larger hydrogen dilution. Moreover, the increase of the hydrogen dilution will decrease the rate of deposition and the Urbach energy. It is estimated that with anÂ …