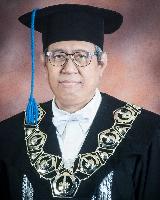 Atas Taman village is a settlement located at the Sumenep palace nearby. It has been acculturated by the Chinese culture, one of the significant influence that affect the architecture of Sumenep since 18th century including the houses. Most of Chinese who came to Sumenep work as the artisan and the craftman at that periode. The aim of this study is to identify the space characteristic of houses of Atas Taman village which is influenced by the style of Chinese houses. Interpretation history and qualitative method were used to complete the data by observing and unstructured interview on house owner and the stakeholders who related to the object of research. The data were analyzed by comparing among the space of houses in Atas Taman and Madura traditional houses to include the space of Chinese houses. This study showed that people in Atas Taman Village still maintain the culture of Madura at their home, especially in the aspect of space, even though the culture has been acculturated to the Chinese culture. They integrated tanean lanjang and Chinese houses. Each of them has a meaning behind it but the people in Atas Taman change the house plan consider to the function of the space and their activities.