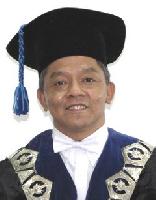 Shear has been regarded as one of the most significant challenges in the behaviour of RC members. When subjected to moment and shear, premature shear failure may occur in structural members containing little or no shear reinforcement such as in thick sections and wide beams or in ordinary beams weakened by tensile forces. Failure can also occur in heavily reinforced elements under unforeseen loading conditions such as earthquake. Given the brittle nature of concrete, which is associated with shear, researchers worldwide have been made significant attempts to predict the response of shear-critical RC members, with most recent use of Bresler and Scordelis and Vecchio-Shim beams as benchmarks. However, many finite element formulations failed to provide accurate simulations of the behaviour exhibited by these beams. This study presents the adoption of smeared-fixed crack concept using the fracture-plastic model to tackle the challenges in predicting the reliable response of shear-critical members, with milestone considered when the results demonstrate good agreement between the predicted model and test data. Extended work will be performed on development of shear database covering wide range of interrelated influencing factors including, but not limited to, size of aggregate (otherwise referred to as aggregate interlock), dowelling actions due to the presence of longitudinal steel bars, shear transfer across cracks, anchorage zone of reinforcement, and size effect. The research will be undertaken with centre of work focusing on simulations of RC members employing sophisticated FE ATENA 3D software. The ensure the appropriate deliveries of this research, analysis of constitutive laws used in the simulations will be first devised. Furthermore, RC members will be modelled and run in the software. Results of this research are anticipated to showcase good agreement between available test data and predicted models in terms of load-deflection response and mode of failure, thereby providing good quality database for shear which can be used later on as reference of design and assessment, specifically for a member significantly subjected to earthquake and other dynamic loads. From this study, it is anticipated that the milestone of this research can be published at least in of Q2 international journal indexed by Scopus prior to the end date of the project.