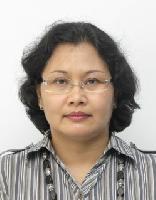 Climate change are tendency which caused by unproportional of carbon cycle in the worldwide. There are beyond number of carbondioxyde in atmosphere. Vegetation of plants which have chloroplast, have capability to process carbondioxyte to be organic compound. There were high diversity of vegetation in tropical country, one of the vegetation is mangrove vegetation.\nMangrove vegetation are area which have high value of carbon sequestration. Carbon cycle consist in mangrove ecosystem. Carbondioxyde are absorb by mangrove leaves in photosyntetic process. Partly of carbon compound were accumulated in plants and the other were fall to the substrat as litterfall. The litterfall were decomposed to be organic compound which dissolved in water, and then some of them evaporate in atmosphere.\nOne of the phase in carbon cycle in mangrove ecosystem is decomposition of litterfall. Decomposition has impressionable by species, submerged, temperatur and decomposer (insect, bacteria and fungi). Insects are one of the causal factor which could decrease decomposition rate. There were important to study forage behavior of insect which play important role in carbon cycle.