2015 : Behavior of Expansive Soil under Water Content Variation and Its Impact to Adhesion Factor on Friction Capacity of Pile Foundation 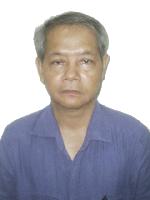