2015 : Bacillus as Siderophore and Iron-bioremoval Bacteria 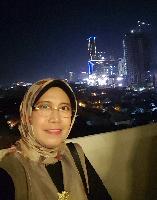 ome Bacillus strains can produce siderophore. Siderophore is a chelating agent for ferric iron as a response to low iron environment. Bacillus has ability as iron bioremoval. The aim of this research was to get siderophore Bacillus strain which could resist to iron and to know the ability of its bioremoval. This research used Bacillus isolated from Kalimas Surabaya ie: A6, DA11, and SS19. The strains were screened for siderophore bacteria in Fe-CAS agar medium. Ferric bioreduction was analysed on medium contained FeCl3.6H2O 50; 100; and 150 mg/L. Ferric bioremoval was measured by Atomic Absorption Spectroscopy method. Bacillus A6, DA11, and SS19 could produce siderophore and also stand to media containing 150 mg/L FeCl3.6H2O. Bacillus DA11 had the highest ability of ferric bioremoval, which was 26.841 mg/L from 33.365 mg/L concentration, with efficiency 80.5%.