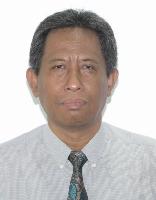 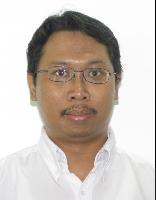 Zinc oxide (ZnO) nanoparticles were successfully synthesised in solvothermal batch reactor using zinc acetate as precursor and ethanol as solvent, without any surfactant addition. Commercial batch Teflon reactor of 21 mL was used and filled 80% capacity with 0.1 M zinc acetate solution. The reactor was heated in an oven and held at a constant temperature for 12 h. In order to investigate the temperature effect on the characteristics of the generated particles, the reactor temperatures were varied at 120, 140, 160, and 180 C. The powder was characterised by its morphology, crystallinity, and photoluminescence spectra via scanning electron microscopy (FE-SEM, Hitachi), x-ray diffraction (XRD, Phillips), and photoluminescence spectrometer (Simadzu) respectively. Spherical nanoparticles were generated for particles synthesised without LiOH addition into precursor. By adding 0.14 M LiOH into the precursor, rod particles were obtained with an aspect where the ratio (length to diameter) of particle increased with temperatures. Based on the X-ray diffraction analysis, wurtzite structure of ZnO in a hexagonal phase was formed. Neither impurities nor other crystalline phases were observed in the samples. The crystalline size increased from 19 to 28 nm by increasing the reactor temperature from 120 to 180 C. LiOH addition led to decrease in the crystalline size at the same reactor temperature. Their crystalline size increased from 16 to 23 nm by increasing the reactor temperature from 120 to 180 C. Photoluminescence intensity increased with temperatures. LiOH addition was able to shift the photoluminescence emission spectra peak from wavelengthÂ …