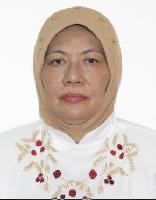 Thermal imaging has been widely used for many applications. Thermal camera is used to measure object’s temperature above absolute temperature of 0 Kelvin using infrared radiation emitted by the object. Thermal imaging is color mapping taken using false color that represents temperature. Human body is one of the objects that emits infrared radiation. Human infrared radiations vary according to the activity that is being done. Physical activities such as jogging is among ones that is commonly done. Therefore this experiment will investigate the thermal signature profile of jogging activity in human body, especially in the face parts. The results show that the significant increase is found in periorbital area that is near eyes and forehand by the number of 7.5%. Graphical temperature distributions show that all region, eyes, nose, cheeks, and chin at the temperature of 28.5 – 30.2Â°C the pixel area tends to be constantÂ …