2013 : The construction of a model of pre-coalition between H1N1-p and H5N1 influenza virus in Indonesia 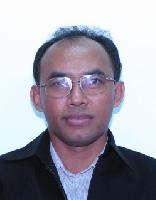 Influenza viruses which are often used for a study in Indonesia are H1N1-p, which is able to adapt without both hemaglutine and amino acids, and the H5N1 as a virus with 170 variants, consisting of 3 types whose spread varies widely. This paper considers the construction of a model of pre-coalition between influenza virus H1N1-p and one of H5N1 strains that attack poultry and humans. The reduction on the model