2019 : Analysis Of Three-Component Seismograms To Obtain The Result Of Moment Tensor Of Earthquake In Manokwari 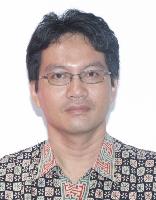 This study analyzed three-component waveform inversion of the earthqake that occurred in Manokwari, Papua on January 13, 2010 at 17: 18: 11 GMT with a magnitude of 5.7 Mw which the epicenter was at-0.72 lattitude, longitude 133.33 and depth of 42 km. The study used the local seismic data downloaded from the data of earthquake IA. Then, inversion of the seismic data were done by using iterative deconvolution methods. This method was implemented in ISOLA software which was developed to obtain the parameters of the epicentre. Furthermore, the results of parameters were used to determine the actual form of the fault by using the HC method. Synthetic seismograms were computed with ISOLA that the input was a model of the earth and the seismogram recorded by seismological stations MWP, SWI and LBM. Interpretation of the analysis of three-component seismogram waveform showed that theÂ …