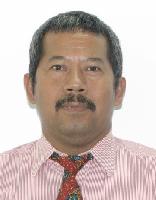 Ferroresonance is an interaction phenomenon between non-linear inductance and capacitance that initiates abnormal waveform of current and voltage. This phenomenon is very sensitive to system parameter and initial condition. In this paper, ferroresonance initiation involved a basic circuit of series ferroresonance with variation of source voltage magnitude on a single phase low voltage transformer. The scheme of experiment was based on the case of transformer energizing. The trends of current and voltage waveform on the primary windings were investigated and transformed by using Fast Fourier Transform (FFT). The harmonics spectrum was then employed to identify the feroresonance mode and calculate the Total Harmonics Distortion (THD) of current and voltage. The experimental results showed that the higher source voltage magnitude caused the ferroresonance responses to be seen more clearly. It was indicated by the more distorted waveform, the higher odd harmonics frequency amplitude especially for 150 Hz, and the greater THD. Based on the harmonics spectrum and wave period, the ferroresonance responses were identified as fundamental mode. The effects of initial conditions, such as residual flux of transformer and capacitor charge, were also seen on the distorted wave peak during transient condition. In addition, the difference of waveform between normal and ferroresonance condition could be more easily observed on the voltage than the current. The waveforms of current and voltage during experiment had been verified by using simulation.