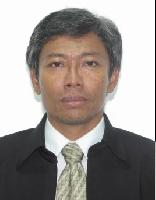 This research is aimed to reveal the kinetics of Cd2+ and Pb2+ leaching from fly ash geopolymer as a promising and sustainable method to solve the problems of heavy metals contamination. The geopolymer was made by using fly ash of PT. IMPOMI in East Java, Indonesia and the ratio of SiO2/Al2O3= 6.5, Solid/Liquid (S/L)= 3.59 and Na2SiO3/NaOH= 2.5. A solution of Cd (NO3) 2 or Pb (NO3) 2 were added at 1,000, 4,000, 8,000 or 16,000 ppm relative to the weight of fly ash. Compressive strength test of geopolymers was carried out at the end of day 7 after curing the geopolymer mixture at room temperature. Leaching tests for the kinetics and mechanisms studies were carried using TCLP method by immersing the resulted geopolymers into 0.01 M acetic acid solution. The ratio of geopolymer mass to the volume of acetic acid solution was 1: 25. ICP-OES was used to measure the leached Cd2+ and Pb2+ while SEM-EDS was used to study the morphology and heavy metal distribution on the polished geopolymer cross section. It was found that the compressive strength of Cd2+ geopolymer was slightly higher than those of Pb2+-geopolymer. The strength of geopolymer decreased at higher concentration of heavy metal cations. The maximum strength (24.4 MPa) was shown by 4,000 ppm Cd2+ geopolymer while SEM-EDX images showed that Cd2+ and Pb2+ were distributed uniformly from the surface to the core of geopolymers. The leaching test reveals that more than 99.5% of Cd2+ and Pb2+ were retained by geopolymer while in depth kinetics investigation of both Cd2+ and Pb2+ leaching shows that the leaching rate follows the first orderÂ …